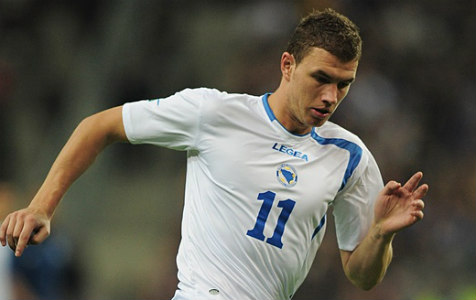 Belgium vs Bosnia-Herzegovina prediction: Both Teams To Score

Belgium head into the game on the back of a disappointing 1-0 loss in Wales. However, the Belgians have not lost a competitive fixture on home turf since 2010.

The hosts look set to be without Liverpool striker Christian Benteke, who is suffering with a thigh injury. However, Everton frontman Romelu Lukaku says he will be ready to step in to Benteke’s shoes if called upon.

Marouane Fellaini should feature despite reportedly incurring a fine for missing his flight from England, while Kevin De Bruyne should be in good spirits after finally completing a big-money move to Manchester City.

Bosnia-Herzegovina have turned a corner under new coach Mehmed Bazdarevic, winning 3-0 in Andorra before beating Israel 3-1, with Edin Dzeko scoring 4 times across those 2 games.

Dzeko, the new Roma striker, is the joint-top-scorer in Group B now.

Under their new coach Ivaylo Petev, Bulgaria recorded their best result in the current qualifiers so far – a 2:2 draw against Italy at home, where the hosts were really close from achieving the 3 points.

The last match gave some chances to Bulgaria for an Euro qualification too as they won at Malta (0:1), while at the same time Norway failed to commit the victory against Azerbaijan, so the distance between both nations is only 2 points before their direct clash.

Norway managed to achieve 3 consecutive wins in the European Qualifiers after they started them with a 0:2 loss from Italy. That defeat was followed by victories against Malta, Azerbaijan and Bulgaria but the last 2 results are not so convincing – a 1:5 loss in Croatia and a goalless draw against Azerbaijan.

Norway is without 4 key players – strikers Joshua King, Adama Diomande, Pål André Helland as well as midfielder Ole Selnæs are all out injured.

Azerbaijan’s home form includes a 2-0 victory over Group H whipping boys Malta back in March, but they were beaten by both Bulgaria and Norway, and Croatia are a step ahead of both those sides on what we’ve seen so far.

Indeed, the visitors won the reverse 6-0, and a 5-1 victory over Norway sandwiched between a pair of 1-1 draws with Italy suggests they’ll have little trouble obliging at 1.36 with bet365.